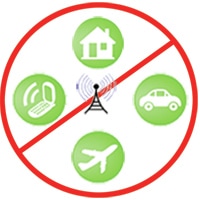 A basic law of physics is that magnetic fields excite and stimulate electrons - that is how electricity is made. Electricity is generated by passing wires through multiple magnetic fields (60 here in the USA and 50 in most other countries in the world) which pulse and excite the electrons making them flow through the wires to be used as electricity elsewhere. Without magnetic fields, there would be no electricity or lights, appliances, electronic devices, transportation, flight, or technology that makes up our contemporary society as we know it.

Another law of physics: Everything that uses electricity gives off EMF (Electromagnetic Fields). Appliances such as cordless phones, stoves, stereos and electronic devices like laptops or tablets transmit powerful, pulsing EMF short distances while Wifi and cell phones transmit lower-powered EMF long distances. This means that strong and weak EMF are constantly going through our body - but what does that mean to our health?

Our body is made up of billions of atoms in complex arrangements called molecules that form our cells and tissue. All atoms have electrons that naturally spin around their nucleus which, when consolidated in a cell, give off voltage readings. Since 1939, it has been established by the medical community and recognized by the US FDA that [bio-cellular] electrical analysis of cellular voltage gives an instant and precise “snapshot” diagnosis of how healthy and how well the cells are functioning (metabolizing).

In other words, the cell’s voltage is simply an electrical measurement of its health. Cells that measure in the higher voltage range [of electromotive vitality] are healthy and in homeostasis with good immune function. Cells that measure in the low voltage range are dysfunctioning and indicative of people who are ill with poor immune functions and symptoms like chronic fatigue, fibromyalgia or many other chronic medical conditions.

How does EMF affect our health?


The electrons of a cell and its metabolic functions are directly affected by EMF. Just like electricity is made from pulsed magnetic fields that energize the electrons, the pulsing EMF emitted from appliances and electronic devices also directly affects the electrons in our cells. As the EMF pervade the cells, the natural free spin of the electrons is manipulated and disrupted by the pulsing fields. Over a period of time, the external EMF can disrupt the electron spin enough to wear down the cell’s voltage to cellular dysfunction and poor health and possibly alter the DNA.

Worldwide research shows that EMF as small as 3mG (milligauss) over a period of time, can disrupt and lower the cell’s voltage and functionality; subsequently the body may go into chronic fatigue syndrome, mal-absorption, Parkinson’s, MS, cancer, etc.

We are dosed daily with EMF from cordless phones (15mG), Ipads (20mG), laptop computers (25-50mG), dashboard of cars (50mG) and many other electrical devices such as the new powerfully transmitting Electric SmartMeters. We live in an environment of constant EMF attack.

Years ago when alarm clock plug-in radios came out, there was a large increase of brain tumors from the strong EMF to the head which when sleeping, was within one meter of the radio. Now EMF is everywhere and everyone should consider some form of protection

Jet Lag is a perfect example of a major EMF attack. The interior of a commercial airplane has been measured at over 100mG – really a big milligauss oven that everyone is baked by EMF for the entire flight. Many people discuss their Jet Lag, yet have no idea that EMF plays a large role in their reaction.

A healthy researcher who worked with us abhorred flying because it would disorient her for almost a week after a flight. A woman flight attendant in her mid-forties with many years on the job came in for a consultation and explained how she and her flying colleagues were always tired and sick with colds and headaches. She also told us that a fairly large percentage of the retired flying community, instead of enjoying the golden years, got ill and died within a few years of retiring.

However, there is also another major health issue about Frequent Flyer Fatigue that most people do not know. Flying high altitudes has much less atmosphere to buffer the increased radiation in the cabin from the big thermal-nuclear device we call the sun. The radiation saturates people with more radiation at high altitudes in one commercial flight than most people who work full time in the nuclear power industry. BiomagScience suggests Biomagnetic therapy in conjunction with 3 grams of vitamin C daily to provide the minimum anti-oxidant “donor electrons” to supplement the body with enough healing energy to overcome the massive free-radicals of the radiation.


The key to EMF protection is to make sure your cellular voltage is kept high.

EMF is not able to electrically degrade the cells of someone who is healthy and has a high electromotive vitality/cellular-voltage. A large EMF attack like a commercial flight may wear them down a little for a short time, but their high cellular vitality heals rapidly and their health bounces back immediately.

However, for the individuals who have had their energy (voltage) continuously robbed and degraded by EMF with the new Electric Smart Meters or using cordless and cell phones, sitting or sleeping too close to a stereo or plug-in radio, using a laptop all the time on their lap, or perhaps sleeping against the wall that backs up to their refrigerator, the low voltage individual can develop an unfortunate downward spiral of poor health that can lead to illness and premature death. This is evident by the massive EMF research from all over the world.

The answer to overcoming poor health from EMF is to
increase the body’s electromotive energy which increase the cellular voltage.
Gadgets to Counter and Protect from EMF

There are numerous types and shapes of pendants, crystals, earthing pads and electronic devices that promise to absorb, neutralize, harmonize, and energize the pulsed EMF to protect the body. Although the earthing pad will turn your body into an EMF antenna which is exactly the opposite of what you are trying to achieve, most of the gadgets have a small effect on people. But none of them has the electromotive power to measurably and immediately increase the cellular voltage that BiomagScience therapy does.

When BiomagScience consulted with the above mentioned flight attendant, her voltage measurements were so low, it was apparent her cells were dysfunctional and her immune system was compromised; that is why she was constantly tired with a cold and a headache. After an hour of energizing her body with Daytime Therapy, her cellular voltage bumped up and she said she ‘suddenly did not feel tired.’ Then over the next month, she reported her cold, headache and fatigue went away and that she ‘had not felt so good in so many years, she had forgotten the feeling.’ She was so excited, she wanted to establish a BiomagScience clinic in Chile where she lived.

The researcher, who hated to fly because of the long-term disorientation from Jet Lag, finally took a flight using the Daytime therapy. After landing, she couldn’t believe there was no disorientation; the same with her return trip - no disorientation at all. The Daytime Therapy protected her from the EMF attack.

We were not surprised that the researcher did not experience her unusual jet lag because after so many years of research and applied magnetic therapy, these results were common even in unusual cases. However, with the Bio-cellular analysis technology, we were finally able to measure and evaluate how our therapies increased electromotive vitality which gave us a greater understanding in developing more advanced therapies.

An individual just reported to us that “I typically feel horrible on airplanes, disoriented, motion sick, brain fog, tightness, fatigue, particularly on take-off and landing. I am happy to say that on our most recent trip (VA to CA and back again) I felt so much relief with the magnets. Actually, what worked best was having them on my sternum AND having them on the CVS/back of neck. The sternum alone position was helpful but both of them together allowed me to actually speak and move my head during landing.”

Every sick or chronically ill case we measured, had low voltage readings before magnetic therapy and substantially higher readings after therapy. A number of times, the voltage would go up more in an hour of therapy than six months to several years of a specialized diet could provide nutritionally. Under “BIA testing” under “Case Studies” is the study of a woman whose voltage, after being in bed for 25 years from malabsorption, went up 25% (over 100 points) in an hour; this is unheard of and has never been seen in medicine before. After a year of BiomagScience therapy, she was playing competitive tennis. This is the norm from using proper Biomagnetic therapy, not the exception.

We had two cases of people awakening from comas whose relatives applied BiomagScience Advanced Circuit Therapies to try to save them. Both individuals were in end-stage and were terminating; one from septic shock and the other from acute pancreatitis and at the time when BiomagScience therapy was applied, were not expected to live for more than a day or two. Instead of dying, these people woke up and started healing. Although no voltage measurements were taken, these individuals represent the lowest cellular energy value of a living body, yet the proper Biomagnetic supplementation provided the primary life energy to energize their cells enough that life and health was restored.

BiomagScience worked with an individual had EHS (Electromagnetic HyperSensitive) to EMF. She  was so extremely sensitive to EMF, she couldn’t be in the house when the refrigerator or the air conditioning fan was running. She finally escaped to a cabin in the mountains with no electricity. At the time, we didn’t know about cellular voltage, bet we are certain that her voltage readings would probably have measured extremely low. We started her slowly on Biomagnetic therapy and over a period of time, she was able to build-up her energy/voltage and resume a normal life.
See testimonial Overcoming EHS (Electromagnetic HyperSensitive) to EMF at the bottom of the page,

The General Rule of preventative maintenance for good health and high vitality for EMF Protection is to do the Daytime Biomagnetic Therapy and drink 2-4 glasses of Bio-Negative energized water which increases cellular hydration, nutrition and detoxification. Done daily, this therapy supplements and helps maintain high cellular vitality/voltage just as a multi-vitamin provides a daily source of nutrients.

Remember when flying - do both the Daytime Sternum and lower CVS placement. The BioMagnets normally do not set-off the airport metal detector, but it is advised to wear the BioMagnets under your clothing so you do not have to explain something that they might stop you for wearing.
Healthy cells make a healthy body
which is the best protection from EMF